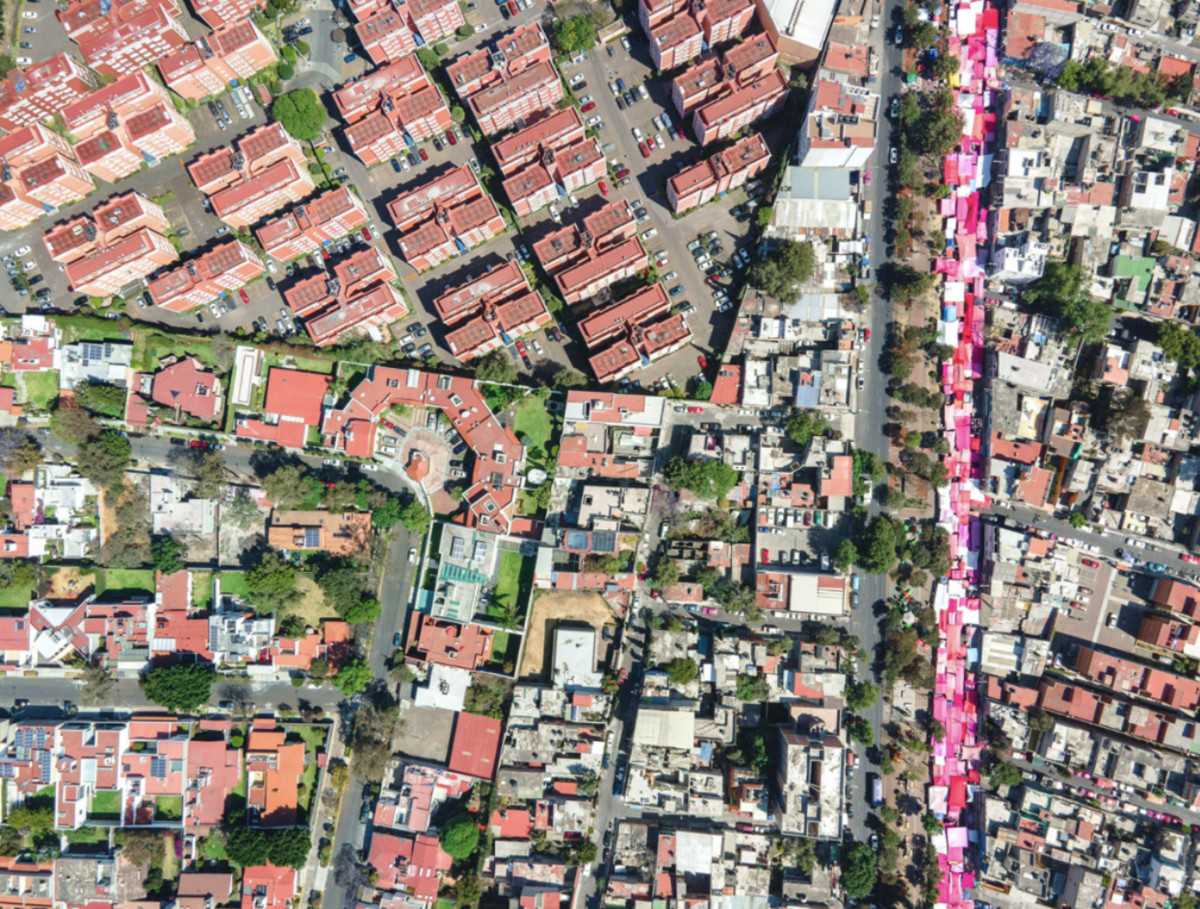 The first time that I mapped out poverty statistics at a municipal scale, I was completely mind blown (figure 1). Looking at the spatial inequities from a bird’s-eye view drove my desire to find more granular data of social indicators to better understand intra-urban socioeconomic inequities. Spatial data techniques help us to find patterns and anomalies across data that improves our understanding of people’s lives in cities, raising new questions about urban infrastructure in terms of public goods provision, land-use, and access. However, finding granular socioeconomic data is hard! Despite new data collection processes using administrative, mobile phone, Google Street View, and satellite imagery data, there is a general lack of data that allows us to understand the dynamics of people living and working in cities, and even more so in cities of the global south. 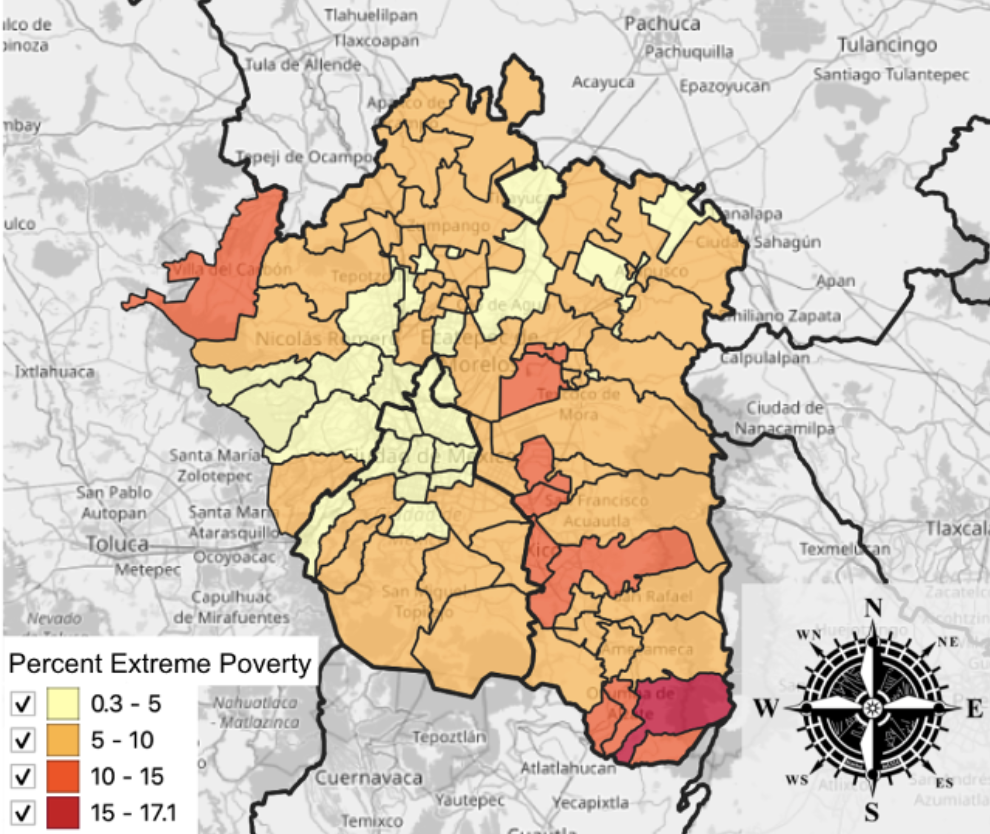 For my doctoral research, I have been trying to dig deeper into the drivers of intra-urban spatial inequities, so I decided to study people’s daily commute (using mobile data) in metropolitan cities (such as Mexico City) with a particular focus on street vendors working in public space. Although street vendors might be representative of other informal workers in cities by sharing similar constraints and organizational structures, street vendors differentiate themselves from other informal workers because of their visibility in public spaces. Moreover, street vendors live under intense socioeconomic uncertainty since they are not incorporated in formal taxation and social security programs.

Thus, I wanted to examine how street vendors decide where to locate in the city. From my lived experience, I figured that some vendors would want to work in downtown Mexico City or outside of the subway since these are locations with a high traffic of people. Or inside the subway? Outside a hospital? I also wondered if the distribution of vendors was similar within the city than in the periphery of the metropolitan area. My initial preconceptions were that people living in the peripheries would want to go to work in more central locations. Ultimately, in the back of my mind I was thinking about a point-pattern map of all the vendors, trying to identify hot spots of vending in the city and adding a weight for the distance they had traveled from their home to their work location. My intention was to link this data to health outcomes at a municipal level hypothesizing that the vendors that traveled further were also the most socioeconomically disadvantaged and more prone to being obese due to poor working conditions.

However, I soon came to realize that the existence of street vendors in public space was as contentious as collecting data of their location. In this process, I have encountered three main barriers: methodological, political, and ethical barriers.

There is a great diversity of street vendors, some that have a fixed stall, others that constantly move from house to house, with a bike, or with a cart. Others that sell in itinerant markets on certain days of the week, in different locations of the city, or even vendors that sell on specific dates, like the Christmas season. Some of them do different types of vending depending on the day of the week or do multiple shifts throughout one same day. This wide range of vendors made me realize how easily I could be double counting or neglecting the work of family members helping the owners of the stall or the cart. Regardless of these issues, I thought I could either use computer vision techniques classifying images using Google Street View or satellite imagery to enumerate vendors.

First, I wanted to generate an algorithm through computer vision that quantified fixed street vendors outside of subway stations using Google Street View or satellite imagery. Beyond the difficulties that the classification of images can bring, I encountered a great variety of fixed stalls across the city (figure 2). Therefore, I thought I could focus on itinerant markets instead, using satellite imagery, since the top of the stalls are easier to identify, forming clusters covering up entire streets (see figure 3). However, I still needed to think about how to connect where the workers of these markets live and why they decide to work in a specific location of the city. These questions made me encounter the political barriers. 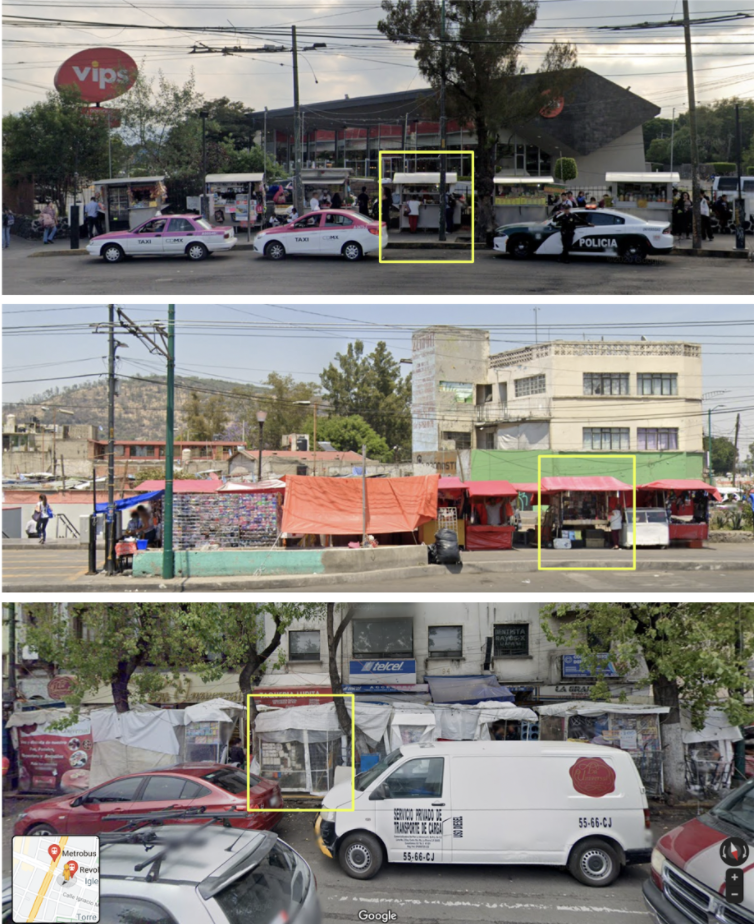 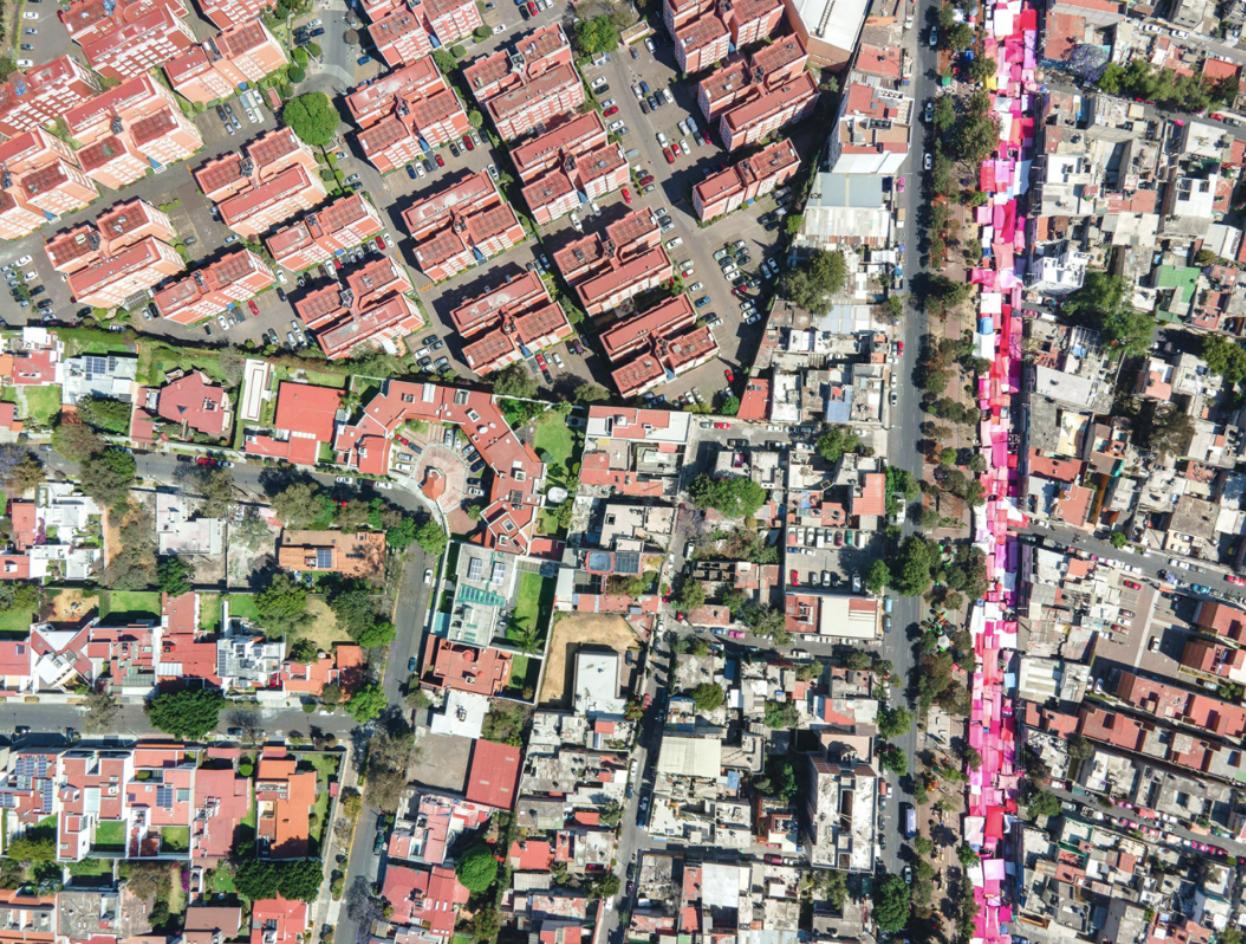 First, I needed to understand how street vendors could work in certain locations. By carrying out in-depth interviews to vendors, I realized that most vendors that do not sell in downtown Mexico City like to work close to where they live to avoid long commutes. This led me to discard an analysis of their commuting behavior and focus on their political organization instead, as a crucial component of their location decision.

Although the organization of street vendors varies across cities, Mexico City has a long history of vendors belonging to strong street vending organizations that regulate the use of public space, negotiating with local authorities and street level bureaucrats. During the 1950s and 1960s, there was a fierce persecution of street workers, leaving a scar in most vendors’ lives (Alba & Braig, 2022). While older vendors recollect being beaten up, having their goods confiscated, or being sent to an asylum, all vendors today still encounter confiscation of goods and harassment from street level bureaucrats. Although there is an oscillation between tolerance and repression, a great degree of distrust prevails between local authorities and vendors. For these reasons, it is extremely sensitive for vendors to disclose any personal information on where they live, their work schedule, and their economic activity.

However, in 2019, the government of Mexico City launched an open-data portal to promote accountability and transparency in the city, mimicking data collection efforts carried out in U.S. cities. Among other data collection efforts, the city sought to collect data on street vending, increasing tensions between vendors and local authorities, increasing vendors' fears for the infringement of their privacy and potential displacement. The creation of the open data portal revealed the political difficulties of enumerating vendors. On one hand, vendors overestimate the number of people working in a given location to have greater political leverage and remain in place. With a greater number of vendors, the leaders of vending organizations can justify a larger political support of local authorities, facilitating the negotiation process over public space while agreeing to cooperate with the authorities’ needs. Also, it is common that vendors increase the number of years that they have been working in a location since street level bureaucrats are more tolerant towards vendors with tenure. On the other hand, local authorities underestimate the number of vendors since they only officially count vendors that belong under the government’s supervision, which is a small percentage of all street vendors. There are also incentives for local authorities to present a smaller number of vendors in public data since the city elites argue against street vendors since they have been historically stigmatized as the main drivers of disorder, crime, and disease (Barbosa 2008). So, if the enumeration of vendors is so contentious, why should I attempt to quantify vendors using novel computational techniques - that also carry their own biases?

If I were to carry out the enumeration, how would street vendors, street level bureaucrats, and local authorities be impacted? Does enumeration increase vendors’ political voice, or does it make them more vulnerable to persecution? How could vendors appropriate enumeration as an advocacy tool to increase their political leverage and improve their working conditions?

Previous work on development planning has focused on the participation of communities in generating instruments of advocacy and dialogue to communicate with city authorities and improve their daily conditions (Mitlin, 2008; Watson, 2014). Previous advocacy work from Shack/Slum Dwellers International (SDI) has supported slum residents to develop a dataset on informal settlements (Beukes, 2015; Patel et al., 2012; Watson, 2014). These efforts have helped communities in improving their local and particular conditions while also avoiding eviction from the local authorities (Beukes, 2015).Similarly, street vending enumerations could provide vendors with the tools to negotiate their relocations or evictions in the presence of urban renewal projects. Enumerations can also help to avoid daily harassments from local officials by providing vendors and their organizations with information that can transform into real power when engaging with the government (Chen & Carré, 2020; Patel et al., 2012; Roever & Skinner, 2016).

However, it seems that the most pressing issue is to fill a legal gap where the local governments do not have the authority to regulate space, promoting clientelistic exchanges between the leaders of vending organizations and local politicians. While street vendors pay a weekly fee and yearly permit to work in public space to the vending organization, there is less transparency and accountability on how money is distributed to local politicians.

For these reasons, I question my ethical position in enumerating and mapping street vendors, the extent to which vendors would be interested in co-producing an enumeration effort, and if this development of a dataset could improve the livelihoods of vendors across the city to remain in place. These concerns are at the root of my obsession with mapping. Mexico’s National Council for the Evaluation of Social Policies (CONEVAL) motto is “what can be measured, can be improved”. Since politicians ground their policies on what is being quantified, how will policymakers recognize workers and attempt to improve their livelihoods if they are not enumerated? Do we have to obsessively strive to enumerate the bodies that are being excluded from the technicalities of policy making? Should we attempt to make all data open in contexts where the owners of data are not the communities? What should the role of open data portals be in a context where data exposes legal ambiguities, leaving people living with socioeconomic, political, and legal disadvantages in a more disadvantaged position? How could this translate in the context of Los Angeles, New York, Chicago, and San Francisco where street vending is also prevalent?