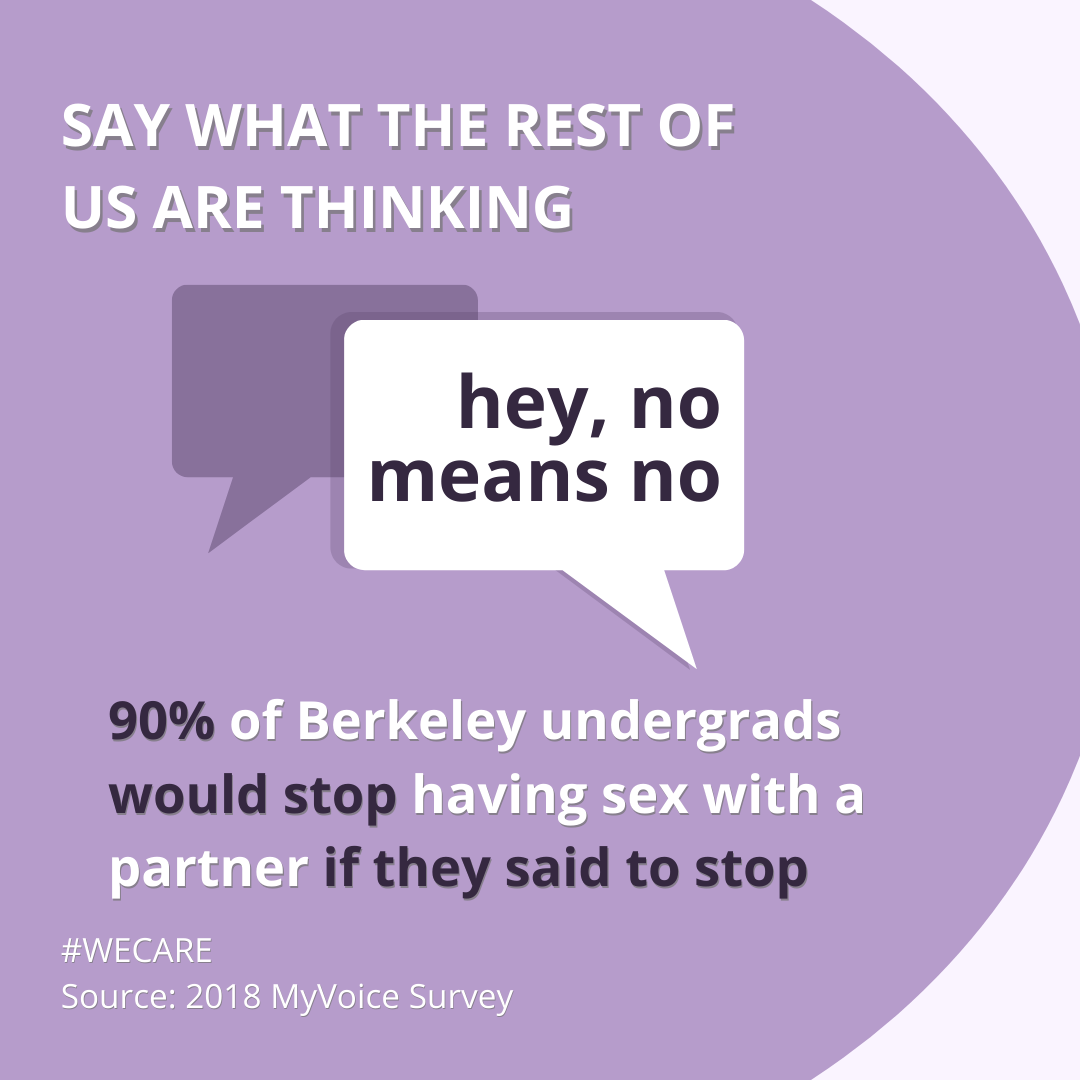 As a result of the COVID-19 pandemic, university prevention and care centers for survivors of sexual violence and sexual harassment (SVSH) have experienced multiple obstacles in converting prevention and survivor support advocacy services to digital formats. Meanwhile, rates of domestic violence, interpersonal violence, and other SVSH-related cases have spiked almost doubly, all over the country, particularly in college campus communities (source). When the PATH To Care Center shifted their #WeCARE campaign to run via social media, there was no clear way to assess whether the posts were reaching Berkeley students in an impactful way. The #WeCARE Campaign utilizes social norms theory to shift and update campus perceptions of SVSH norms. In short: social norms theory tells us that if we believe there are only a few people in our community who would behave in a certain way, such as intervening to stop SVSH, then we ourselves might be afraid/doubtful/less confident to do so or act out of the (perceived) norm. Here’s an example of billboards for the #WeCARE campaign that you may have seen scattered across Berkeley’s campus and an Instagram graphic version you may have seen come across your feed. 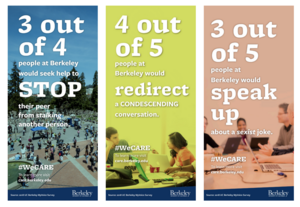 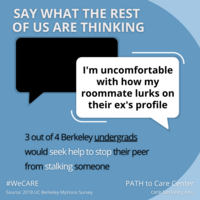 In our study, we focus on improving the perception of the norm “likelihood to stop a friend who is trying to have sexual contact with someone who is passed out”. The UC Berkeley MyVoice Survey found that:

Even though 91% is the self-reported ideal, behavior in a social situation is more likely to reflect the 77% perceived norm. In other words, because individuals perceive intervention in this situation as less socially acceptable, the likelihood of an individual actually intervening is very likely going to be lower than the reported 91% of the time. The goal of the #WeCARE Campaign as well as our study is to help update the underestimated perceived norm to the true norm, which can help effectively decrease SVSH.

With all else constant, the treatment group saw the treatment graphic as one of the images in the scroll. The graphic is a newly created graphic, which has not been utilized in a previous #WeCARE campaign. The control group, in place of the treatment, saw a generic Cal Student Store ad on the scroll. 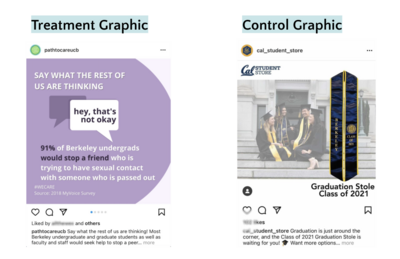 We ran multiple linear regression models where we regressed the SVSH Norm outcome variable on the treatment indicator variable a variety of controls including gender, year, time spent on pages, and so forth. Here we show the results of our simplest model.

The control group responded to the SVSH norm question on average 21 percentage points away from 91. The treatment group was only 16 points away from 91, a full 5 percentage points closer to 91. The treatment coefficient was not statistically significant in this simple model with a p-value of .11, but it was statistically significant in the more robust models where we included multiple controls! Even in the simple model, we believe our findings have real practical significance. It demonstrates that seeing 1 social media post for a few seconds brought the entire treatment group closer to the true norm by 5 points, which we think is pretty incredible of an impact.

Marginalized communities disproportionately experience SVSH; we critically assess and acknowledge that the “true” statistic of 91% would intervene may not be true for all communities on campus. In some, it may be higher, and in some lower. Thus, participants from marginalized communities on campus may be less likely to believe the true statistic, let alone change their perceived norm based on one campus wide statistic. We frame our analysis with respect to community-level differences and make note of this very real potential heterogeneous treatment effect (i.e., different communities reacting differently to the graphic). For example, we had one pilot study participant report, “I don’t believe in the 91% statistic because it’s not reflective in my experience, so that’s actually why I reported a really low measure when you asked me about it again.”

SVSH prevention is difficult, nuanced, and critical work to the well-being of the campus community. We showcased one approach to assessing the effectiveness of a digital social norms SVSH prevention campaign (and found it to be quite effective)! We humbly thank the mentorship and support of Liat Wexler and Melissa Kwon on this research project. To access confidential care or learn more about SVSH prevention: visit https://care.berkeley.edu/