Where the Streets Have No Name: Spatial Data in Informal Settlements 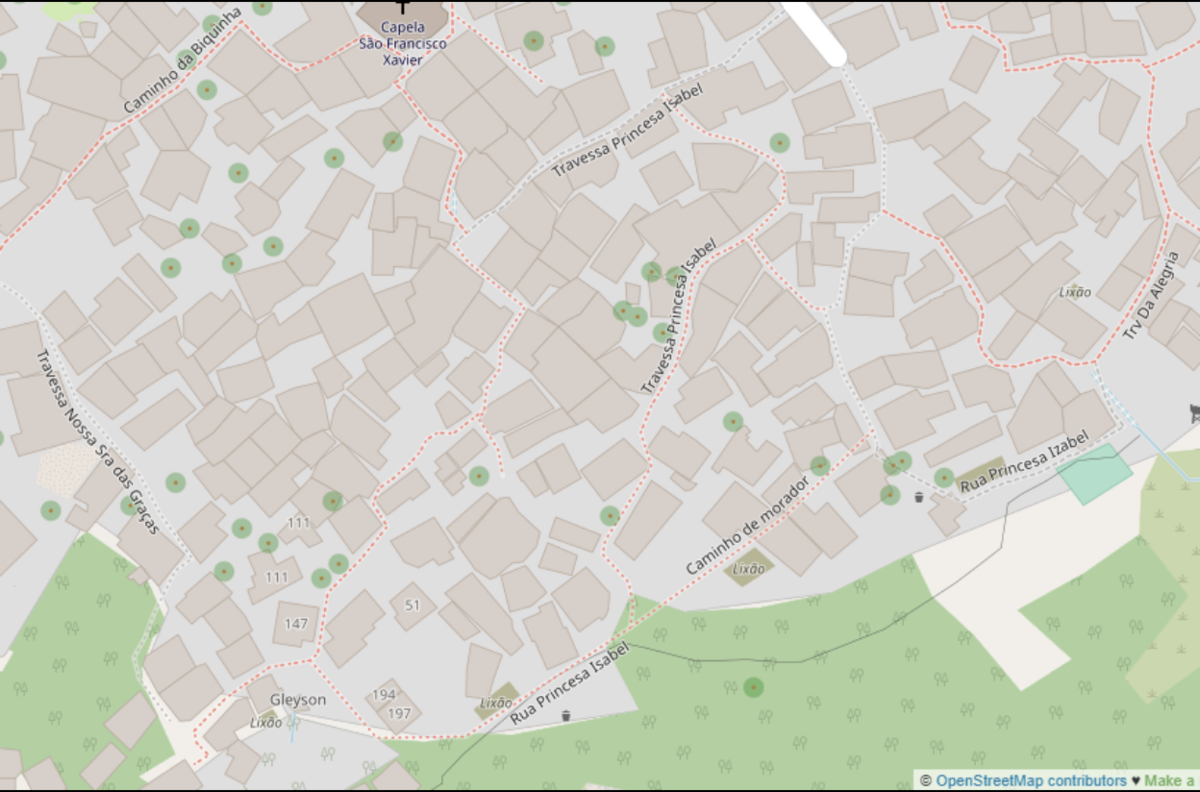 In our era, with Google Maps on every smartphone, it may feel like spatial data is easy to come by. However, this is not the case for many communities in the world. In particular, for informal settlements, developed “outside state control over urban design, planning, and construction,” accurate maps can be hard to come by. You may open up Google Maps to find a few streets with no names, or sometimes, nothing at all. Informal settlements are frequently excluded altogether from formal maps, in spite of the hundreds of millions (at least one billion at last count) who live in these communities worldwide.

This blog post narrates my journey to find good spatial data for an informal settlement, Morro do Preventório, in Niterói, Brazil, which ultimately led me to crowd-sourced mapping and its democratization of knowledge creation. The power of being mapped or not, in detail or not, and by whom, bears reflection for anyone who works with map data, and I hope this narration provides a space to contemplate our typical maps and the alternate possibilities that exist.

To put it another way: the streets do have names - you just need to ask the people who live there.

Currently, I’m working on a project that involves connecting study participants to their census tract, in order to describe the characteristics of their neighborhood. This puts me in good company with many other researchers who rely on geo-coding to connect data. By geo-coding, I mean turning a written address into geo-coordinates (latitude and longitude) so as to map it spatially. In my case, we’re looking at survey data on diabetes, and seeking to connect participants to their census tract’s information about access to sanitation services, population density, and other data by geo-coding their address.

But to map addresses in Preventório, I need…a map of Preventório, or I won’t find the locations I’m looking for.  This is called my reference data. However, a map of Preventório with only major thoroughfares will not be of much use to me if I want to geo-code residential addresses. And a preliminary, long-shot glance at Google Maps showed… 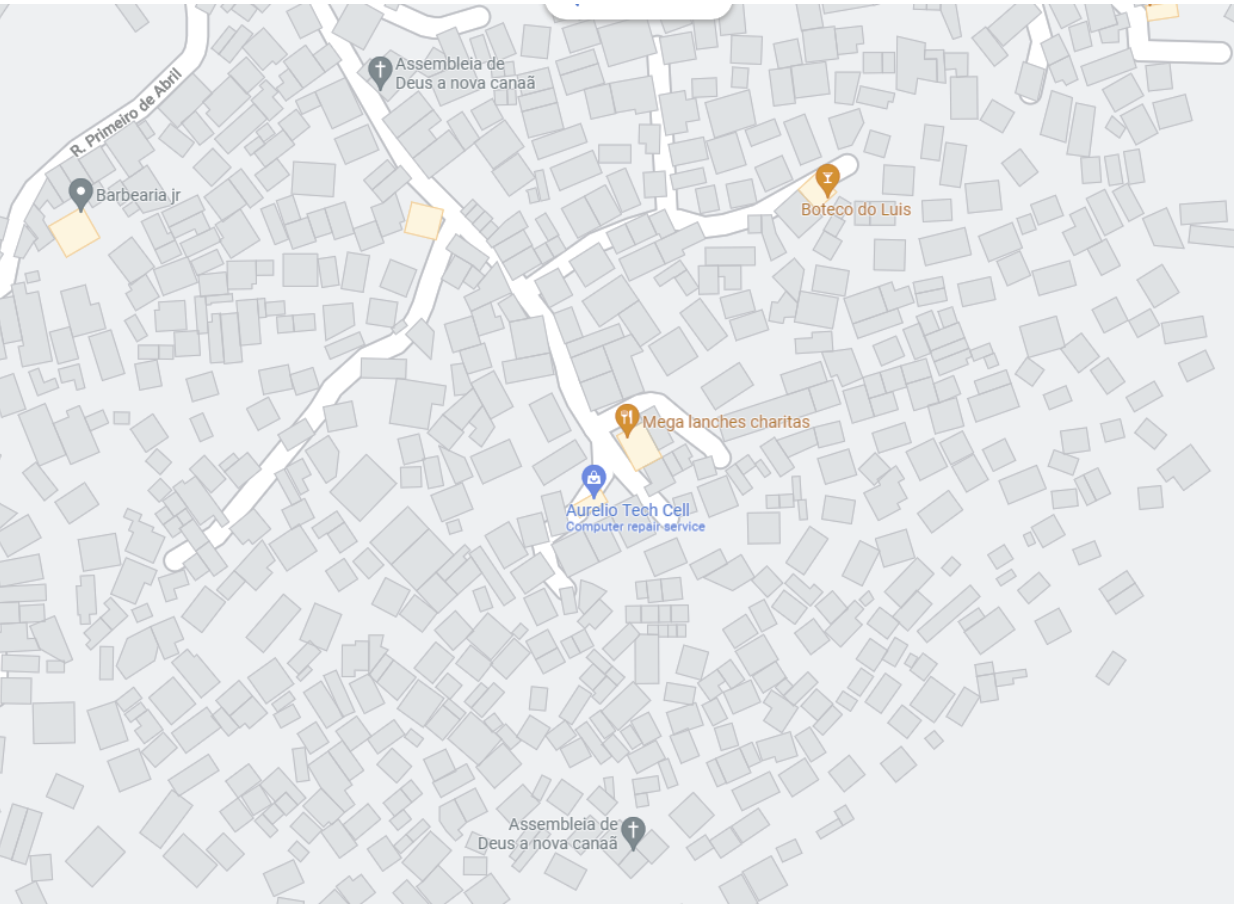 Figure 1: Overview of Preventório Community. Many grey rectangles are show with few streets, few details in general, and even fewer names.

…practically no information save for a few major thoroughfares with no names. Not enough to pinpoint addresses, anyway. To find a reliable map for this area, I needed to turn to other sources.

Google bore no fruit, and after searching through a number of other options (Wikimapia, a bust; municipal maps, nowhere to be found…Waze data? It was worth a try…), I found OpenStreetMap

Some readers may be quite familiar with what is often called the Wikipedia of maps. It’s been around since 2004, and now has more than eight million contributors. OSM (for short) is based on the idea that anyone can contribute to maps, all edits are chronicled, and on the whole, the community of users will correct for errors, accidental or otherwise.

While this doesn’t guarantee perfect accuracy, it is worth noting that even almighty Google cannot guarantee perfect accuracy. The world is constantly changing – cities build new roads, bus stops become defunct, cliffs fall into the sea. To keep up with that constant change, all maps need to be updated, and therein lies one of OSM’s great strengths: the possibility of rapid, responsive updates. Famously, after the catastrophic 2010 earthquake in Haiti, members of the OSM community re-mapped the island in a week flat.

So, bearing in mind some of OSM’s strengths and weaknesses, let’s take a look at the same community in OSM. 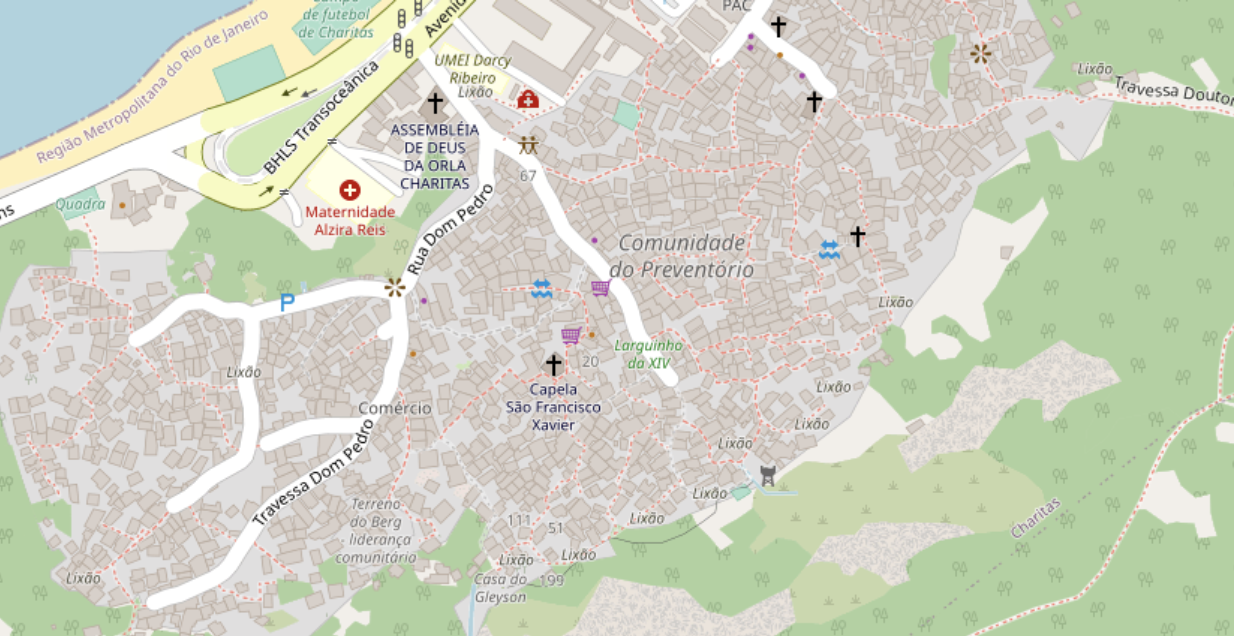 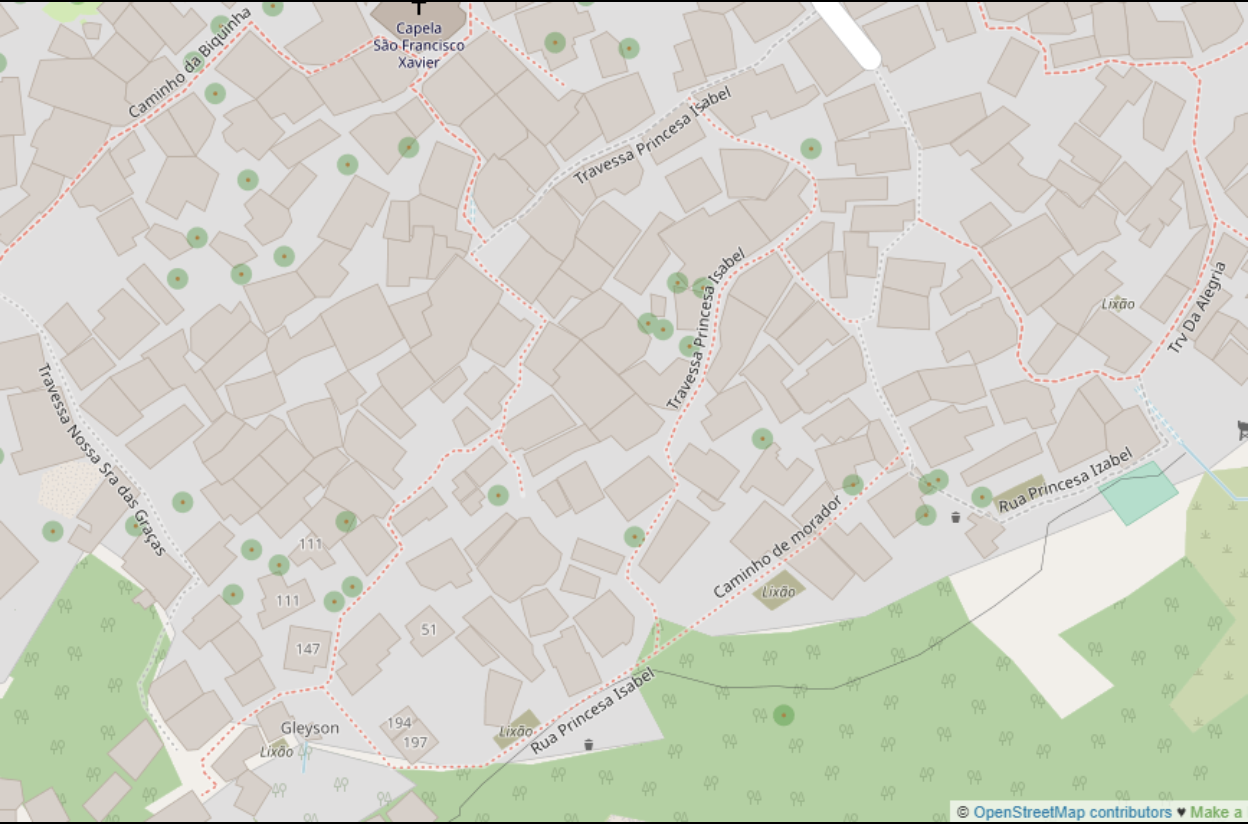 Figure 3: A magnified version of the OpenStreetMap of Preventório. Street names can be seen, as well as green circles demarking trees, and some house numbers.

At this point, this story takes a serendipitous turn. Looking at these maps, I found myself reflecting on the power of making mapping open to all – giving people the possibility to define their own communities is very powerful and ethically important. Fundamentally, it democratizes spatial knowledge creation and preserves and foregrounds community expertise. But then, I couldn’t be sure that this map was made by community members…

Or could I? Cut to me, searching the internet for pictures of Morro do Preventório for a presentation, when I happened upon the image below. 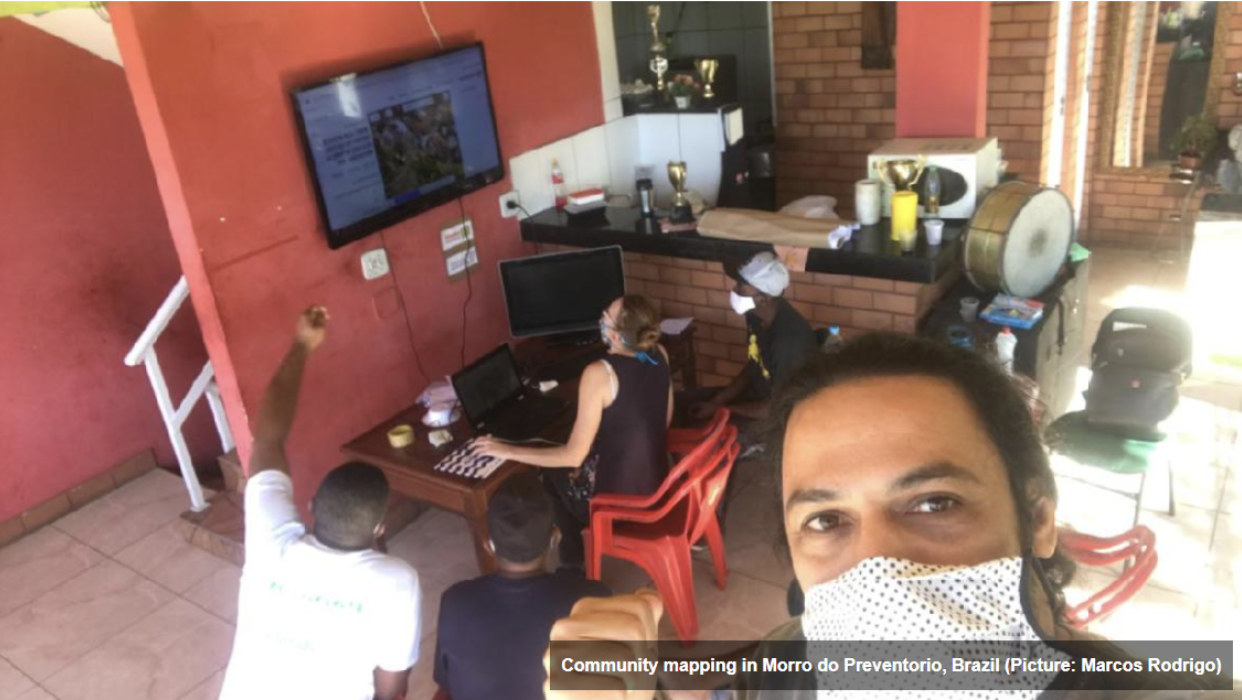 This happens to be a photo of Preventório community members mapping their home neighborhood on OpenStreetMap. The accompanying webpage, which can be found here, documents a community/researcher collaboration to co-create a map of Preventório. The project had dual aims: first, to “represent the communities’ world views”, and second, to create “a geo-spatial evidence base to enhance conventional risk and resilience related policy making.” The page details not only how residents, project partners, and researchers put the map together, but also what future details residents hope to include, and how they hope to leverage the map data they co-created.

So, in a remarkable turn of events, it is possible to know much of the history of this map, who made it, and how it came to be.

The Power of Community Mapping

The creation of an OSM map of Preventório, to my mind, offers a remarkable example of the fruit of community-based mapping. For one thing, the community was literally not on the map prior to the project, so in terms of sheer visibility, the OSM map is a success. For another, OSM facilitates the creation of spatial data to document items of concern to residents – for example, areas of solid waste accumulation (as in Preventório) – which is a strong tool for advocacy efforts. Finally, this map intrinsically relies on community expertise to create spatial data. Doing so centers resident knowledge as the voice of authority, and particularly for communities that experience marginalization in many other ways, that is a victory.

Of course, questions remain. Is OSM truly broadly accessible? By the communities who might most benefit from self-mapping? Can anyone contribute to a map? In the case of Preventório, the beautiful OSM maps were in part the result of academic collaboration and outside training. It is worth asking what elements of the process pose barriers to other communities carrying out the same data creation and self-definition absent similar collaboration.

But in the meantime, I am indebted to Preventório’s community members for putting their home on the map, literally, and to researchers at Warwick University for facilitating this process. In the end, I hope this little journey has given you a moment to reflect on the stories behind our spatial data and who gets to create it, as it has for me.